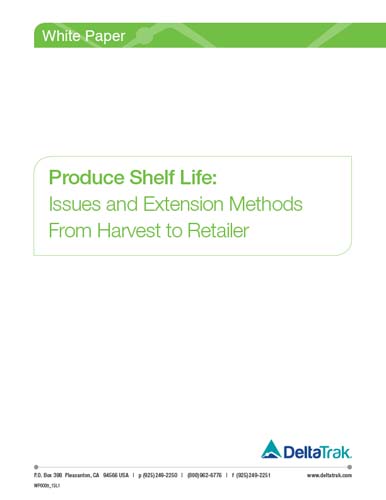 Produce is a highly perishable commodity making shelf life a race against the clock for growers, processors and retailers. With national averages of produce shrinkage at 6%, according to the Produce Marketing Association, shelf life costs US retailers in excess of $2.1 billion per year. This paper will review factors that shorten and extend shelf life, and multiple methods to extend and measure produce shelf life as it pertains to produce processed from harvest to delivery to the retail facility. What is Shelf Life? Shelf life is the period of time a food has before it is considered unsuitable for consumption or sale. The shelf life of fruits and vegetables can vary considerably depending on multiple factors. Post harvest shelf life of produce revolves around the basic fact that fresh fruits and vegetables continue to function like living organisms, even after they are harvested. Freshly harvested produce uses stored energy and oxygen to remain alive. This process is called respiration and the faster the particular produce uses up its stored energy, the shorter the produce shelf life. The faster an item respires the faster it will decay. First, we take a look at why shelf life is important and who is it important to.

According to the U.S. Environmental Protection Agency (EPA) the U.S. generates more than 34 million tons of food waste each year costing around $1 billion every year just to dispose of all its food waste. A University of Arizona study further claims that U.S. restaurants, convenience stores and supermarkets alone throw out 27 million tons every year which they calculate represents $30 billion of wasted food. This waste has significant impact financially and environmentally on individuals and businesses alike and although these numbers are not solely the result of shortened shelf life it does contribute significantly affecting growers, processors, retailers and ultimately the consumer's bottom line. Financial loss coupled with today's lengthening of food transport is every food handling institution's motivation for considering new technologies that extend shelf live.

From the moment produce is harvested the clock starts ticking and produce decay begins. The main factors that affect shelf life of produce include improper handling, inadequate humidity, temperature abuse and Ethylene exposure. One UC Davis study concluded that a peach with all four controls maximized can last approximately 28 days. If that same product is subjected to storage at 43.2 F rather than the optimum 32 F its shelf life is decreased by 50% (figure 1). Subsequently, if you add in the remaining factors of ethylene exposure, inadequate humidity and improper handling a peach may only last between 1 to 2 days. Solutions that supply tools and data to accurately control, monitor and document these factors during storage and transport can effectively address these issues.

If produce is improperly handled during harvest and is damaged or bruised this causes the fruit or vegetable to expend more energy faster than undamaged produce reducing its shelf life. Additionally, if harvesting conditions are not sanitary bacteria has the chance to thrive as bacteria feeds off of stored energy. This results in more rapid decay and spoilage. Improper handling practices increase water loss & respiration and provides avenues for bacteria or mould to take root. Additionally, bruises or damage invites decay and contamination. Produce that is bruised or damaged mechanically or by human handling are more prone to decay. As an example, National Center for Appropriate Technology (NACT) documentation states that heavily bruised prunes were found to develop 25% more decay than unharmed prunes which developed only 1.3% decay in storage. Examples of Improper post harvest handling factors that can affect shelf life include:

According to a publication from the University of California, produce respiration increases 200 to 400% for each increase of 18°F (10°C), up to temperatures of about 77°F to 86°F. Additionally, it is important for growers and shippers to note that a byproduct of respiration is heat. Which means a truck with an ambient temperature of 32 degrees may have produce registering 2 to 4 degrees higher. Therefore monitoring the ambient temperature may not be sufficient. Optimal storage and transport of fruits and vegetables varies by product with optimal temperatures ranging from anywhere between 32 F with 90 to 95 percent relative humidity for strawberries as one example to 55 F – 59 F with 85 to 90 relative humidity for grapefruit. Using methods to monitor and analyze both ambient and product temperature and humidity during their processes allows handlers to better manage shelf life.

Ethylene is a hormone produced by plants and released as a colorless, odorless gas which the plants use to regulate their own growth, flowering, ripening and aging. Injury and damage to plant cells, plus the natural process of maturation causes plants to increase ethylene production. It is an increasingly damaging cycle since the presence of more ethylene means hastening of decay.

Ethylene increases cellular respiration, which in turn increases metabolic rate. After produce has been harvested this increase in respiration will shorten shelf life. Ethylene also causes plant cells to lose water, leading to dehydration, drying, and shriveling. It reduces many beneficial nutrients, such as Vitamin C, and also leads to loss of leaves and flowers on the plant, yellowing and spotting of leaves and fruit skins, and sprouting (such as in onions, for example). It also changes the taste and aroma of fruits and vegetables.

For the produce industry one of the most damaging effects of ethylene gas is the fact that it stimulates plant cells to increase their ethylene production, which accelerates all of these adverse affects associated with ripening, maturing, and decaying, and thus shortening the window of time for shipping, storage, and sale. Pallets of produce experiencing any extended period of shipment may arrive with damaged unsellable product. This is a growing concern for food handlers needing to remain competitive as the food distribution chain lengthens and costs of spoilage rise. Unique shelf life solutions using innovative packaging alternatives can slow the effects of Ethylene on perishable commodities.

Proper handling methods, careful monitoring and control of temperature and humidity and use of shelf life extension packaging methods are key factors that contribute to extending the shelf life of produce.

When to harvest produce is extremely important in maximizing produce shelf life. According to the National Center for Appropriate Technology (NACT) produce harvested at its peak lasts significantly longer than produce harvested too soon or too late. Once produce is harvested it is important to handle the produce as carefully as possible to avoid bruising or damage. This assures that the produce arrives with a good appearance and free of decay. Handling processes that will avoid damaging produce and extend shelf life include proper training for labor, handling produce as little as possible, packing in the field if possible, avoiding high drops into containers, padding cartons & containers and not over loading or filling containers.

Preserving food using reduced temperatures has been utilized for over 100 years. Storing produce in cold temperatures with appropriate relative humidity levels protects fruits and vegetables from decay and bacteria. This extends the shelf life which in turn extends the product's selling period. Transporting and storing produce at low temperatures slows the aging and respiration process of produce as well as minimizing moisture loss. Additionally, the lower temperature minimizes the chances of produce being affected by bacteria, yeast and molds. Today there are many cost-effective ways to monitor temperature and humidity. The most effective solutions utilize tools and data management methods that allow for fast and accurate access to the data produce handlers need to make important decisions quickly.

When using temperature with produce it is important that the temperature remain constant. Exposure to alternating cold and warm temperatures may increase the chances of decay as it results in produce accumulating moisture on the food's surfaces. Refrigeration rooms and transport should have adequate air flow and insulation to assist in maintaining temperatures. Modern day solutions provide cost effective and efficient facility temperature monitoring systems that can monitor temperatures and alert produce handlers of temperature excursions.

Coupled with temperature is the need for a relatively high humidity when storing or transporting produce. Produce is made up of significantly quantities of water. Water content translates to freshness and is why typically fruits and vegetables are sold by weight. Water loss therefore is an important factor in the shelf life of produce. The factors that affect water loss are temperature, humidity and air flow. To maintain water most produce need to be stored or transported in a high relative humidity range. Since refrigeration removes moisture this can be problematic. Growers can use various tactics to combat this issue including using humidification devices, pails of water with fans blowing air across them or wetting floors.

Temperature, humidity and handling factors have long been known to affect produce shelf life. Ethylene, a relatively newer known factor in produce ripening according to industry research, was first seriously studied in the 1930s. The effect of ethylene exposure has increased as an important factor due to the lengthening of the average shipment & travel time for all produce from grower to consumer. This has increased due to the fact that food must travel further today as a direct result of the lengthening of the food distribution chain. This is a result of the marked increase in imports and exports, the transition to fewer and larger suppliers, and the proliferation of regional distribution centers where most supermarket goods are being routed through. This lengthening of the food distribution chain means produce is exposed to ethylene for longer periods. Combining low cost temperature monitoring with efficient ethylene control packaging can protect produce and extend shelf life.

New packaging strategies have been developed to address the challenges of limiting ethylene exposure in transport. Modified Atmosphere Packaging or MAP as it is commonly known is a technology that attempts to manipulate the atmosphere surrounding the produce in such a way to reduce or eliminate its exposure to ethylene

There are different types of modified atmosphere. One method injects oxygen, carbon dioxide and nitrogen into pallet covers or containers in order to modify the air surrounding the fruits and vegetables. This gas mixture or gas flushed type of system requires that the air surrounding the product be removed and the desired gas mixture is then inserted. The exact concentration percentage of oxygen, carbon dioxide and nitrogen used is dependent on the type of food or produce is being transported. The mixture is dependent on the product, packaging material and storage temperature. The gas must be inserted into an airtight enclosure. These systems are complex, require significant added costs for the gas and are labor intensive. Additionally, using this method on a pallet of product is only effective if the seal remains intact rendering it ineffective for multiple delivery situations.

An alternate and less expensive method incorporates additives directly into plastic films used for covering pallets or lining boxes of produce. PrimePro EAP® or Ethylene Adsorption Packaging is a new technology that falls into this category of modified atmosphere packaging methods.